mud inside a cable junction box in the Generator house

The problems started at around 6:00pm on the 10th of September 2017
when an unprecedented amount of water came from Nyakishenyi hills
carrying rubbish, logs and boulders. Some of the materials being
carried got stuck in the way under the bridge to the power house past
surgical ward toilets forcing water to go over the bridge and getting
into the power house and also breaking down one of the pillars
supporting the bridge. Some of the materials that managed to pass
under the bridge got stopped by the pipe enclosing an HV cable
connecting to Nyarushanje section of the overhead net work and crosses
the river near the Gilkes generator tail race outlet, being supported
by pillars on both sides of the river about 2 feet high.  So much
pressure was exerted on the pipe and cable as the water tried to forge
its way downstream until the pillars broke down and the cable pulled
off the poles and eventually from the terminals falling into the
water. This caused a short circuit that triggered the generator to
shut down.  The surge arrestors were damaged and the poles moved
about 20 degrees from their upright position. 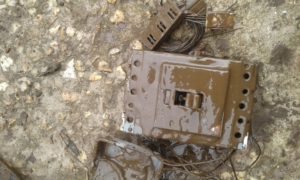 When the shut down happened it was not possible for any one to cross
to the power house to start a generator because the whole of the lower
part of the hospital compound was engulfed in water and mud. So for
about 45 minutes no one could get to the powerhouse. When finally the
water receded and the electricians were able to get into the power
house, they discovered mud about one and half feet deep had been
deposited and the ossberger generator partially submerged. Plan B was
to run the Gilkes to supply the Hospital and wait for the next day to
do the cleaning and assessment of any damage that could have been
caused.  Sadly the  Gilkes could not run because of a short circuit
that had been caused by water entering one of the inspection  chambers
on the hospital ring circuit, and since it was already dark it was not
possible to get this traced and fixed. 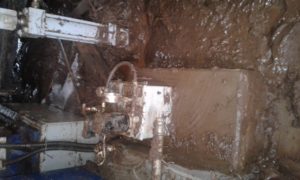 The biggest challenge now was
how to cater for the intensive baby care unit in  which the sick
babies are mostly dependent on oxygen concentrators and  incubators
and the only option remaining was deploying the small petrol
generators. Unfortunately their capacity  was not sufficient for all
the equipment that was connected at that time and as a result some
three babies lost their lives that night. The next day,  we cleaned
the power house, straightened the poles and reconnected the HV cable
temporarily supported way above the river so it is not easy for water
to reach it should it flood again. Everything was  thoroughly cleaned
in the power house and dried and we were able to restart the ossberger
yesterday the 12th of September at about 1:30pm.

About two hours later we discovered the gear box oil was leaking
profusely from the turbine side of the gear box shaft. When contacted
Gideon directed us to an oil filter in the cooling system that we
discovered was badly clogged. After cleaning it we were able to rerun
the generator and we are back on line. Thanks to every one for praying
and supporting us.